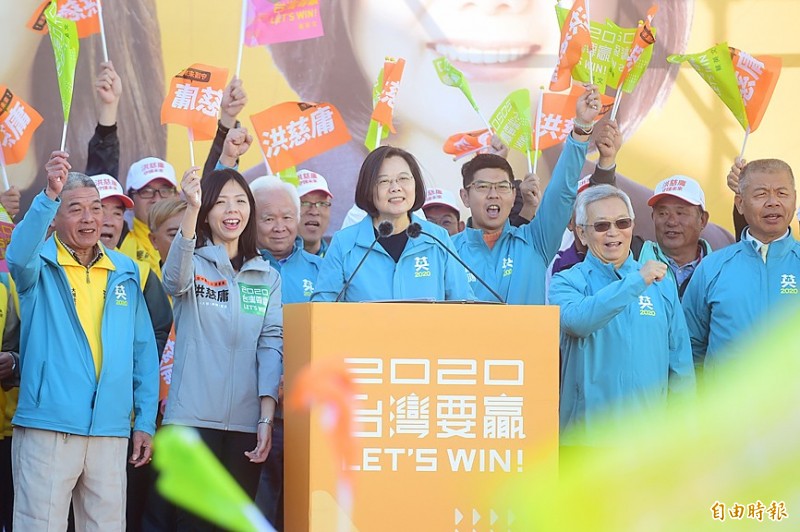 DECISION: Taiwanese must safeguard their sovereignty, otherwise they would have to take to the streets to wrestle it away from China, President Tsai Ing-wen said

President Tsai Ing-wen （蔡英文） yesterday urged voters to re-elect her, saying that the Jan. 11 elections are pivotal, because “the whole world is watching Taiwan” due to the protests in Hong Kong.

“The world wants to see what Taiwanese will decide. [The international community is] concerned that what has been taking place in Hong Kong might happen in Taiwan as well,” she told the crowds.

Speaking about China’s “one country, two systems” formula, Tsai said: “This is not an option for Taiwanese.”

“Therefore we must safeguard our sovereignty, because if we no longer have it, Taiwanese will have to take to the streets to wrestle it away from China,” Tsai said.

She urged everyone to vote, saying: “The bigger the turnout, the louder our voice and our decision can be heard by the world... When our citizens cast their votes, we can safeguard Taiwan’s sovereignty, freedom and democracy, by which we can ensure to continue have these for our future generations.”

Meanwhile, Vice President Chen Chien-jen （陳建仁） focused on the nation’s multicultural society, saying that government policies in the past few years have allowed foreigners to settle down and enjoy Taiwan’s freedom and democracy.

Speaking at a gathering of new immigrant women in Taichung, Chen said the government’s New Southbound Policy is an important direction for the nation, as are its improved policies for “new residents” — foreigners who have acquired Republic of China citizenship.

DPP officials at the gathering said they met many new residents who have lived and worked in Taiwan for more than 20 years after marrying Taiwanese men, and that the best two words they had for the nation are “freedom” and “democracy.”

Many of them said they are happy to live here, because they can vote, participate in public affairs and fulfill their dreams, the officials said.

“Taiwan is a multicultural society and a vibrant place composed of many ethnic groups that welcomes people from other countries. Some have been here since historic times, and others arrived only recently, but everyone in Taiwan can pursue happiness and a better life. So we must cherish the freedom and democracy that we have,” Chen said.

《TAIPEI TIMES》 DGH not to use Chinese-made …