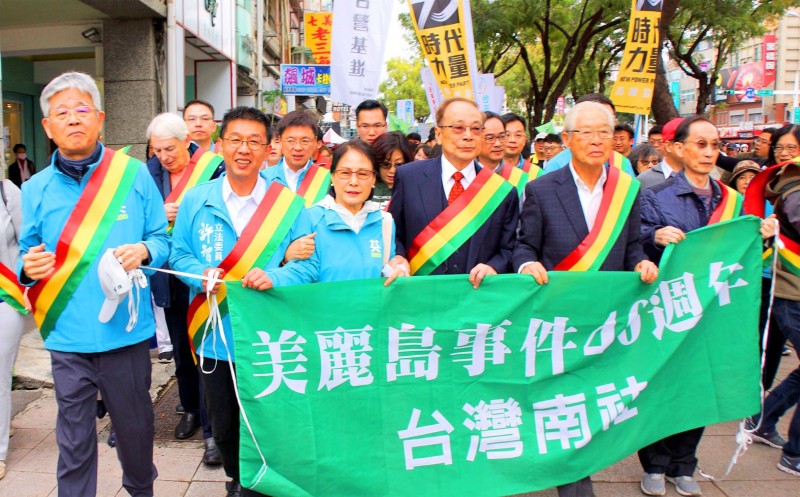 Members of the public and politicians from several parties yesterday participate in a parade in Kaohsiung commemorating the 40th anniversary of the Kaohsiung Incident, also known as the Formosa Incident. Photo: CNA

A parade marking the 40th anniversary of the Kaohsiung Incident was held in the city yesterday to commemorate the sacrifices of people who fought for the nation’s democracy, freedom and human rights.

The Kaohsiung Incident, also known as the Formosa Incident, refers to a police crackdown, under the then-Chinese Nationalist Party （KMT） regime, on a rally held by Formosa Magazine and opposition politicians on Dec. 10, 1979, to mark Human Rights Day.

The event is generally recognized as an important turning point in the nation’s democratization.

Former premier Chang Chun-hsiung （張俊雄） — who provided legal counsel for several victims following the incident — and human rights activists from Taiwan and abroad attended the parade, which also featured speeches by a number of victims of the incident.

Although the incident is now a distant memory, the people of Taiwan today should cherish their hard-won democracy, freedom of speech and human rights, Chang said.

President Tsai Ing-wen （蔡英文） took part in the parade briefly before heading to another event.

The parade concluded with a prayer led by pastor from the Presbyterian Church.

Presidential Office Secretary-General Chen Chu （陳菊） took part in the prayer, expressing gratitude for living through that era as it has made her life more meaningful.

She also thanked the attorneys who defended for the victims, and the Presbyterian Church in Taiwan and several human rights groups who helped victims of the incident.

Chen was among eight people, including veteran activist Shih Ming-te （施明德） and former vice president Annette Lu （呂秀蓮）, who were tried in a military court and given sentences ranging from 12 years to life in prison for their involvement in the rally in 1979. Forty-three other people were tried in civilian courts and given two to seven-year sentences.