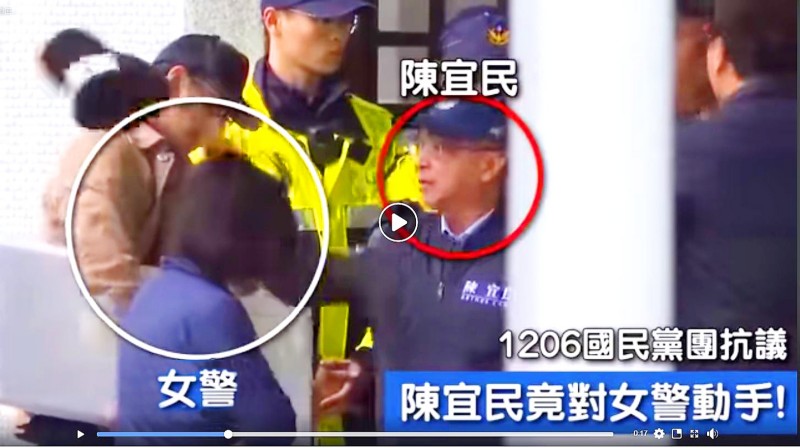 The Democratic Progressive Party （DPP） yesterday condemned Chinese Nationalist Party （KMT） lawmakers for allegedly pushing a police officer at a protest on Friday, and accused it of using excessive violence against civil servants and officers.

A group of KMT legislators and city councilors were on Friday blocked by police from entering the Ministry of Foreign Affairs to demand that Minister of Foreign Affairs Joseph Wu （吳釗燮） explain the ministry’s stance on the suicide last year of Su Chii-cherng （蘇啟誠）, the then-director-general of the Osaka branch of the Taipei Economic and Cultural Office in Japan.

Footage shared by DPP Legislator Wang Ting-yu （王定宇） yesterday appeared to show KMT Legislator Arthur Chen （陳宜民） asking a police officer which unit she belonged to and knocking off her hat before pushing her.

Ho said that KMT legislators William Tseng （曾銘宗） and Lin Te-fu （林德福） also intimidated a ministry press official and repeatedly asked him whether he was a National Security Bureau agent, calling on the KMT to apologize for treating police and civil servants like “enemies.”

Chen’s actions constitute gender discrimination and contempt for the police, DPP spokeswoman Lee Yen-jong （李晏榕） said, asking whether the KMT’s acts of violence on Friday, as well as a protest it staged on Monday — during which party members carried a mock coffin with Su’s name on it and tried to rush into the ministry — were signs that its presidential campaign was not going well.

Tseng said President Tsai Ing-wen’s （蔡英文） administration was trampling over the rights of the legislative branch by sending “500 police against nine legislators” who wanted to enter the ministry.

On the DPP’s claim that he and Lin strong-armed a press official, Tseng said that the person approached him and Lin to ask questions, adding that they simply asked his to produce his identification first.

There was no altercation of any sort, Tseng said, adding that he reserved his right to file slander charges against the ministry.

Chen said the police officer wore a cap with the words “New Zealand” emblazoned on it, had not identified herself and stood nearby recording the altercation on her cellphone.

“I do not think a cap with the words ‘New Zealand’ printed on it is official wear for the Republic of China police,” he said.

Chen denied pushing the officer, saying that he tapped her on the shoulder to ask her to leave.

He could understand why Su committed suicide after online criticism against him, Chen said on Friday.

He would demand the minister of the interior and the corps to apologize if it turns out that the officer had indeed not identified herself, he added.