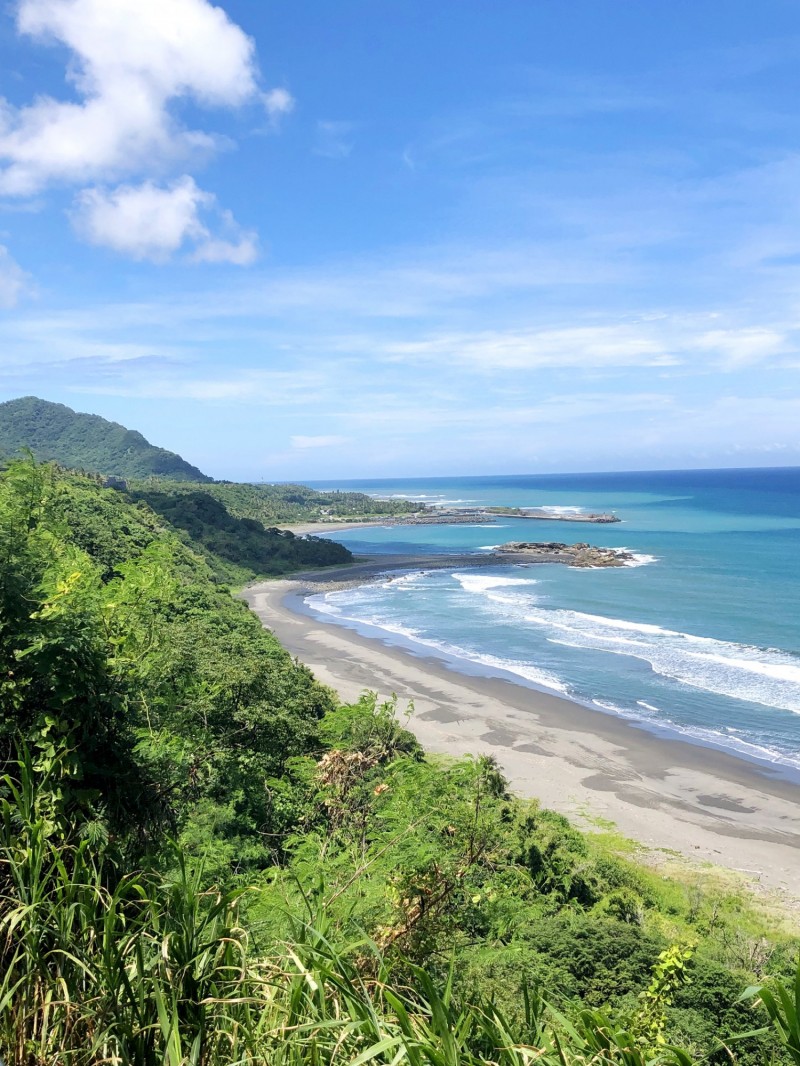 Provincial Highway 11 offers picturesque views, like this one between Hualien and Taitung. Photo: Chris Fuchs

Renting a car and driving around the island for a week can be by turns exciting and terrifying. Here’s what to expect if you decide to hit the roads.

Navigating the highways of Taiwan can be a hair-raising experience, one that sparks a range of emotions from extreme excitement to sheer terror.

I wasn’t quite sure what to expect when I decided to rent a car this summer and traverse the island clockwise, starting from Taipei, over the course of 10 days.

Information on the Internet in English was sparse. Some on TripAdvisor noted that roads were generally good, though advised against driving in cities.

Chinese-language forums offered more insight. On backpackers.com.tw, one person said there was a time when foreigners wouldn’t dare drive in Taiwan, but conditions had improved of late. Another urged foreigners not to drive in Taiwan at all, adding that no one follows the rules, including cars, trucks, motorcycles and bikes.

Given the lack of consistent information out there, I had to find out for myself.

I decided to rent my car online weeks in advance while still in New York. Based on the reviews, I went with Chailease Auto Rental （中租租車）, which has a number of locations in Taipei. Chailease’s Web site is in both Chinese and English and is easy to navigate.

I chose a Toyota Yaris 1.5, booking it for nine days. （I wound up cutting the trip short by one day because of Typhoon Lekima. More about that later.）

As of publication, Chailease offers a variety of promotional packages. With a 40 percent discount for a rental of six or more days, the car cost NT$15,525 （around US$502 or 456 euros）.

Renters without a local driver’s license may first need to get an international driving permit in their home country. This step is important and one that I almost overlooked. I purchased mine for US$20 at the American Automobile Association, a not-for-profit member service organization in the US.

When I arrived at Chailease’s Nangang branch, I spoke to the customer agent in English, instead of Mandarin, to see how the process might go for non-Mandarin-speakers. In short, it was very smooth.

To begin, I was asked to present my passport, a state driver’s license and an international driving permit. Photocopies were made of all those documents. I was also asked for the credit card I used to book the rental online and an additional one that could be used to cover incidental fees, such as tickets for speeding.

The agent mentioned that highway tolls were recorded electronically and that I would have to pay those fees upon my return. He also explained where I could park legally. A red line, he said, means no parking, while a yellow one indicates that standing is allowed. （Parking is permitted by white lines.）

A binder at the counter provided additional information in Chinese and English, including details of the insurance policy that comes with renting the vehicle.

Soon after, the agent looked over the entire car with me, recording any existing scratches or damaged areas, as well as how much gas was in the tank. Drivers are responsible for returning the car with the same amount of gas or else they have to pay the difference.

To play it safe, I took photos of the gas gauge and all sides of the car, in case a dispute arose over a previously damaged area not noted on the form.

Chailease offers a free GPS for rentals of three or more days. I’m not sure how useful the device would be for those who can’t read Chinese or understand Mandarin since, according to the agent, it couldn’t be set to English. The GPS did prove handy for announcing approaching traffic cameras, used for ticketing motorists who flout speed or car-length restrictions. Otherwise, smartphone navigation works just fine.

The roughly one-hour ride from Taipei to Yilan County on the east coast was a relatively stress-free way to cut my teeth on Taiwan’s highways.

A big part of that journey involved driving through the “Snow Mountain” Tunnel （雪山隧道）, Taiwan’s longest, which opened in 2006. The car rental agent warned me not to exceed 90 km/h, or go slower than 70 km/h, both of which he said could result in a fine. Tunnel cameras closely monitor speed and spacing between cars, putting motorists on their best behavior.

That, however, wasn’t the case elsewhere, despite the ubiquity of cameras.

One stretch of driving I found particularly treacherous and stressful was along Provincial Highway 9, from Suao Township （蘇澳鎮） to Hualien County. The Suhua Highway （蘇花公路） offered sharp hairpin turns, steep ascents and descents, tunnels that looked like fallout shelters and impatient drivers. Add to that the risk of falling rocks, especially after torrential rains.

Tailgating was the norm. I was fortunate to get stuck behind a slow-moving blue work truck whose speed was hobbled by the steep climbs. I used that as an excuse to do the speed limit.

But others behind me grew restless, frequently crossing the double yellow line, barreling along on the wrong side of traffic, unfazed by all the blind spots created by the curves. Sometimes this resulted in a game of chicken that made me momentarily close or avert my eyes.

When I did muster up the courage to quickly glance over the mountain cliffs and out toward the sea, the scenery was breathtaking. Frequent road construction that crept up with little warning provided opportunities to slow down and take it all in. There were also scenic rest spots for a quick breather and to snap some photos.

The drive from Yilan to Hualien was a baptism by fire, an experience that emboldened me for the rest of the trip, which included picturesque ocean views from Provincial Highway 11 as I drove to Taitung.

While I’d be lying if I said there weren’t anymore hairpin turns or impetuous motorists angling to get a car’s length ahead, the Suhua Highway made me more inured to that. This was especially while driving through Taroko National Park （太魯閣國家公園）, where parking can be limited, and along another mountainous section of Provincial Highway 9 enroute to Kaohsiung.

By that point, I was looking forward to some west coast freeway driving, something I figured would be more akin to what I was used to back home.

That too posed challenges. The biggest for me was staying calm when getting walled in by commercial trucks, both big and small, all exceeding the posted 110 km/h speed limit. Whenever possible, I hung out in the right lane, passing slow-moving vehicles only when no one was close behind.

While the Formosa Freeway （Freeway 3） and Sun Yat-sen Freeway （Freeway 1） didn’t provide much to look at, they did have service stations that offered gas, restrooms and a bevy of food choices. Compared to the east coast, driving from one city to the next was also more direct, without the twists and turns of mountain roads that slow you down.

Driving into Alishan （阿里山） was a big reason for renting a car. Sure, many visit using a combination of trains, buses and taxis — and spend multiple hours doing so. But I wanted the freedom that one’s own car affords, being able to come and go as I please.

Then came Typhoon Lekima. Its path at that point still uncertain, Lekima threatened to pummel northern Taiwan with damaging rain and winds the day before I planned to return to Taipei.

For Alishan, the forecast called for scattered thunderstorms, unrelated to Lekima, so I still decided to drive up the mountain. Before embarking, I filled up on gas. To do so, simply point to the grade of petrol you want （92, 95 or 98） and tell the attendant to “fill it up.”

The serpentine roads were not unlike the others I had already experienced, though a thick fog had descended on the mountain, reducing visibility to zero along parts of the route.

The guesthouse I booked in Jhuci Township （竹崎鄉） sat at the end of a single, steep narrow road that branched off from Provincial Highway 18. At times, the climb proved tough for my Toyota Yaris, while the persistent fog added to my stress.

On a clear day, I’d imagine the views are resplendent and the surroundings peaceful, with all the nearby tea fields. But given the impending typhoon, all I could think of was getting off the mountain. So I cancelled the reservation and drove back a day early to Taipei, which took just under five hours with one rest stop.

Fortunately, Chailease refunded me NT$1,500 （one day’s fee） because of the typhoon.

Despite having lived in Taiwan, I realized I had made the mistake of assuming that the island’s geographic size equated to how much time I needed to explore it.

Instead of stopping to stroll through a tea plantation or sit atop a rock to appreciate the ebb and flow of the ocean’s tide, I spent most of my time on asphalt, rushing to get to my next destination, exhausted upon arrival.

White-knuckle moments aside, I would definitely consider renting a car again, especially when traveling to areas away from cities or public transport hubs. I would also probably rent for fewer days, even if it costs more without the discounts, and concentrate on visiting just a few spots.

Before booking, I recommend doing a rough calculation of the total cost of public transport and comparing that to car rental. For me, the car option worked out cheaper, even with gas costing NT$2,009.

The Alishan Forest Railway departs Fenchihu Station on a two-and-a-half-hour trip down the mountain to Chiayi. Photo: Chris Fuchs

Visitors take in the local sights and restaurants in Fenchihu. Photo: Chris Fuchs