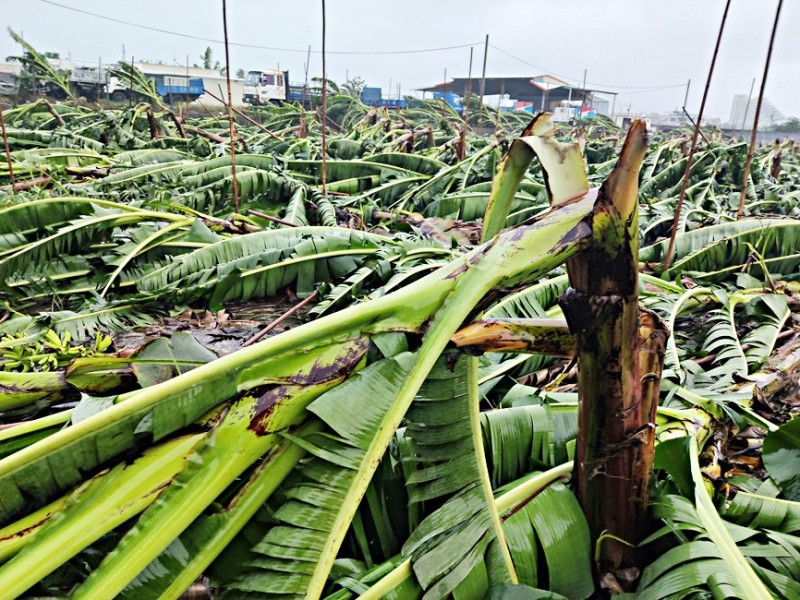 SEVERE IMPACT: NT$25.26 million worth of crops were damaged, affecting vegetable prices, and 3,436 people were forced to evacuate their homes

One person died and nine were injured after Severe Tropical Storm Bailu made landfall in Pingtung County on Saturday, the Central Emergency Operation Center said yesterday.

An 18-year-old drove a motorcycle into a fallen tree in Tainan at 11:49pm on Saturday and died after branches punctured his chest, the center said.

Two other people — a 21-year-old woman on a scooter and a 32-year-old man on a motorcycle — were injured in Tainan after driving into trees that had fallen into the street.

In Nantou County’s Yuchih Township （魚池）, a 73-year-old man and a 48-year-old woman were hurt when trees fell on them.

Meanwhile, five people were injured in Taitung County: three in Taitung City, one on Orchid Island （Lanyu, 蘭嶼） and one in Daren Township （達仁）, the center’s statistics showed.

About 117,500 households lost power at one point, the center said, adding that power was expected to be restored by 5pm yesterday to the 1,328 households in Taitung, Hualien, Pingtung and Chiayi counties that still did not have power.

The center also said that 3,436 people were forced to evacuate because of the storm, adding that 252 of them remained in shelters.

The storm reached China’s Fujian Province at 7am and was about weaken to a tropical depression, the bureau said.

Taipei Agricultural Products Marketing Co said the average retail price for vegetables was NT$42.2 （US$1.34） per kilogram yesterday, slightly down from the average price of NT$43.7 per kilogram on Friday last week, the day before the storm arrived.

Although the average retail price for vegetables dropped at one point, it rebounded again when fewer vegetables arrived at the market yesterday and because the retail market is closed on Mondays.

Only 1,220 tonnes of vegetables arrived at the market yesterday, 20 percent less than on Saturday, the company said.

The largest retail price increase was seen in the cabbages that are harvested in mountainous areas. Their price rose from NT$26.5 per kilogram to NT$36.1 per kilogram.

The retail price for Chinese amaranth also rose 26 percent to NT$57.8 per kilogram, while cucumber and corn prices dropped 18.2 percent and 10 percent, respectively.

The storm damaged NT$25.26 million worth of crops, while NT$215,000 in damage was done to agricultural facilities, Council of Agriculture statistics showed.

Taitung County sustained the most agricultural losses, followed by Hualien and Pingtung counties, and Kaohsiung, the council said.

Banana crops were the most severely hit, with NT$14.61 million in damage, the council said, adding that sugar apples, papayas, watermelons and corn were the next-most affected crops.

The Ministry of Education said that 11 secondary and primary schools reported damage to their facilities.