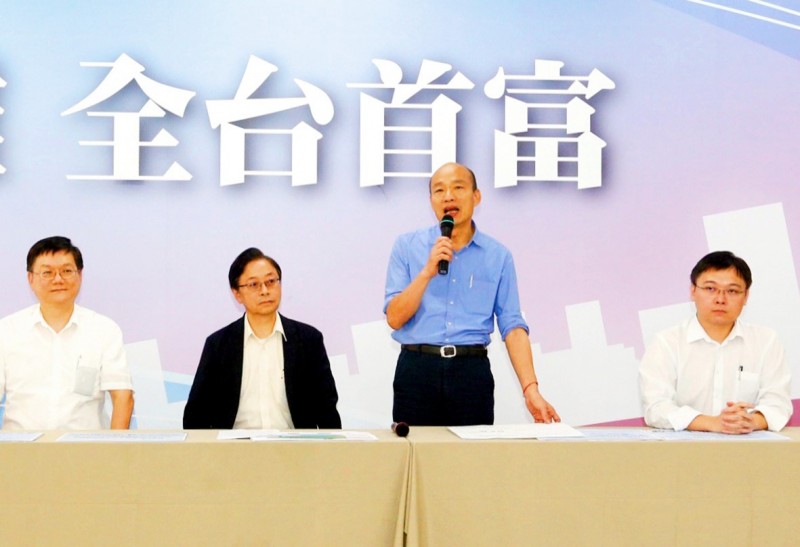 Kaohsiung Mayor Han Kuo-yu’s （韓國瑜） presidential advisory team yesterday said that, if elected president, Han would aim to have at least half of the nation’s energy generated from renewable sources by 2035.

His administration would work on developing alternative energy sources while continuing to use nuclear power, including possibly activating the mothballed Fourth Nuclear Power Plant in New Taipei City’s Gongliao District （貢寮）, Han said during a livestream of the event on Facebook at the Chinese Nationalist Party’s （KMT） Kaohsiung chapter.

“I fully support activating the Fourth Nuclear Power Plant on the condition that its safety can be ensured and that the public agrees,” he said.

To show his commitment, he signed a referendum initiated by Nuclear Myth Busters founder Huang Shih-hsiu （黃士修） proposing the activation of the mothballed plant.

While nearly 6 million people voted in a referendum last year to abolish the legal basis of the “nuclear-free homeland by 2025” policy proposed by President Tsai Ing-wen’s （蔡英文） administration, the government still insists on phasing out nuclear power, Han said.

If elected president next year, he vowed to carry out the referendum result and formulate a new energy policy that ensures safe and stable power supply and prices.

With Han as president, at least half of the nation’s electricity would be generated from renewable sources by 2035, advisory team convener and former premier Simon Chan （張善政） said, adding that 15 years should be enough for local energy sectors to develop mature technologies to meet the goal.

New Taipei City Mayor Hou You-yi （侯友宜） on Wednesday dismissed Han’s proposal of reactivating the plant as a “non-issue,” saying that the plant’s fuel rods are already being transported to the US.

However, Chang said that the remaining fuel rods in Taiwan would be enough to power the plant’s No. 1 reactor.

“The fuel rods that are already abroad could also be sent back, because they will most likely not be sold by then due to their specific model type,” he added.

Existing and future radioactive waste could be shipped to France for reprocessing, Chang said.

“Radioactive waste is not unmanageable. It is just that the Democratic Progressive Party [DPP] refuses to deal with it,” he said.

Earlier yesterday, Hou reiterated his concerns about activating the plant.

Before the KMT stopped the plant’s construction, the DPP had first suspended it and then resumed construction, he said at a fire department event in the city.

The flip-flopping in energy policy has been a waste of taxpayers’ money and has not been supplemented with any plan to ensure environmental sustainability, he added.

Activating the plant would be “a fake issue” until officials can explain how the plant can operate while ensuring safe nuclear power, he said.