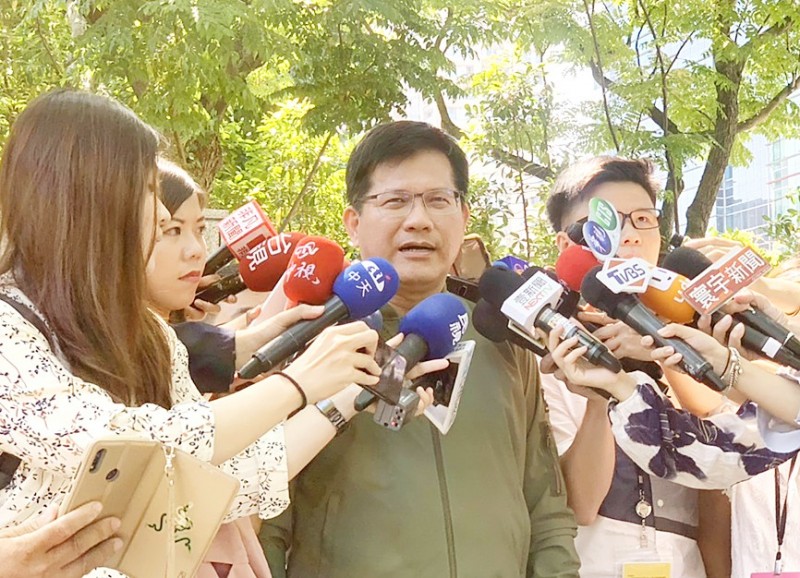 Minister of Transportation and Communications Lin Chia-lung talks to reporters in Taipei on Saturday about a cigarettes smuggling scandal. Photo: CNA

China Airlines （CAL, 中華航空） yesterday said that it had recovered data going back to 2006 on the amount of cigarettes preordered for return flights of presidential state visits, although critics questioned the political implications of the growing scandal over cigarette smuggling, as key information was missing earlier.

CAL came under fire from Minister of Transportation and Communications Lin Chia-lung （林佳龍）, Deputy Minister Wang Kwo-tsai （王國材）, other officials and the public after a news conference on Thursday, when CAL chairman Hsieh Shih-chien （謝世謙） said that due to a computer system upgrade, the airline did not have information on cigarette preorders for presidential delegation return flights before 2013.

Airline officials yesterday said that they had been able to trace 16 files containing figures from 2006 to 2013, and they would turn the files over to the Taipei District Prosecutors’ Office, which is investigating the scandal.

However, on Saturday the only figure made available was 2,973 cartons ordered for a trip in July 2015, which led some people to question if the data related to preorders had been deliberately erased to shield Ma.

CAL officials yesterday said the other two trips that Ma made in 2015 led to preorders of 886 and 10 cartons.

Democratic Progressive Party Legislator Hsi Chih-chieh （許智傑） yesterday said that the newly released airline data indicated that bypassing customs with duty-free preorders had obviously been going on for many years, and that members of the National Security Bureau and the Presidential Office, as well as other top government staff, had abused their authority.

“Bureau people and other top officials were greedy about these small sums for their own profit, but they were civil servants and have contravened the law, so this case must be thoroughly investigated and punishments handed out,” Hsu said.

“As of Saturday, the two files about preordered cigarettes during Ma’s state visits had gone missing. These could have been erased by CAL insiders for political motives,” Hsu said.