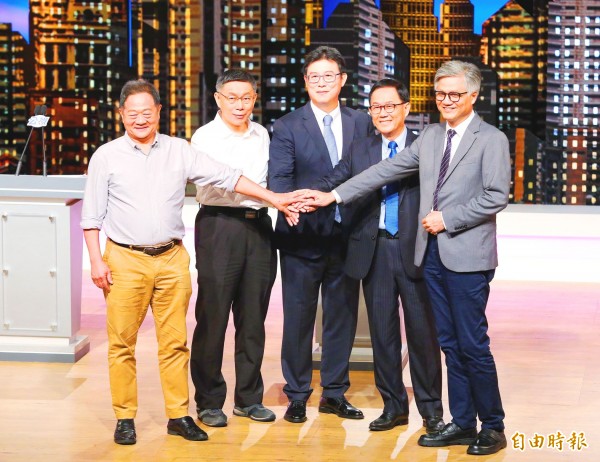 Ko was the only mayoral candidate absent from a youth forum last month and a televised debate last weekend, and yesterday’s debate was the first he attended.

The two-hour debate consisted of three segments, with candidates given six minutes each in the first and last segments to give speeches and make concluding statements, and a middle segment for each candidate to ask questions for two minutes that the other four candidates had two minutes each to answer.

Beginning his speech with his 2014 campaign slogan about changing the political culture in Taiwan, Ko said his administrative team has been dedicated to dealing with the city’s chronic problems, trying to solve them piece by piece, through the principles of “practicality” and “dialogue.”

He listed improvements, citing several development projects including the demolition of an overpass to the Zhongxiao Bridge （忠孝橋）, and said that his team “serves” residents, rather than “controlling” them, and that it deals with practical problems that people meet in their daily lives.

Political power has alternated between the Chinese Nationalist Party （KMT） and the Democratic Progressive Party （DPP） three times, but people are increasingly tired of the battles between the pan-blue and the pan-green camps, Ko said, adding that he has always been open and transparent, and urged the other candidates to publish their campaign spending like he did.

“We, the city residents, must think for ourselves rather than [be swayed by] the battles between the pan-blue and pan-green camps,” Ko said, adding that he does not feel burdened by the platforms of political parties, nor does he have complicated relationships with businesses, which makes him different.

KMT candidate Ting Shou-chung （丁守中） said Ko does not have a core value, citing his inconsistency on many important issues, and called him a political liar for changing stances to please both the pan-blue and pan-green camps’ supporters.

Taipei is losing its global competitiveness, even falling behind many international cities in Asia, and the unemployment rate among young people in Taipei is higher than in New Taipei City, he said, adding that Ko has made a significant effort to gain popularity on the Internet, but people want jobs and higher salaries.

Calling Ko’s remarks about women disrespectful, Ting said that one-third of the city’s department heads would be women if he is elected and that he would focus on urban renewal.

DPP candidate Pasuya Yao （姚文智） said that although the DPP supported Ko in the 2014 election, it has been disappointed because Ko’s administration has demonstrated low budget implementation efficiency and has not settled many major development projects, such as the Taipei Dome.

He said that with his controversial remark that the “two sides of the [Taiwan] Strait are one family” Ko “kowtowed” to Chinese President Xi Jinping （習近平）, who aims to unify Taiwan with China.

Ko’s claim that he has repaid more than NT$5.2 billion in government debt was achieved by overtaxing and moving funds reserved for renewing the city’s MRT metropolitan rail system, Yao said.

Yao also publicized his election campaign finances, saying that he has spent about NT$33.5 million, exceeding his budget of about NT$31.47 million, which includes a NT$5 million loan from the DPP and a NT$3 million mortgage on his home.

Ko received about NT$9 million in donations after he claimed to have closed his campaign donation account in 2014, Yao said, asking Ko where that money went.

However, Ko only said that he would ask his campaign team to clarify the details in the next few days.

Yao said he would solve the Taipei Dome issue with a major park development project to boost the city’s eastern districts, launch many government-led urban renewal projects and subsidize the births of second children to boost the birthrate.

Independent candidate Lee Hsi-kun （李錫錕） said that people need to choose a mayor based on their character and ability to lead them through difficult situations, and condidates should have the foresight and ability to coordinate negotiations and execute policies.

Calling other candidates “prey, like doves and sheep,” he said that he is “a predator, like a lion or a tiger,” which Taiwan needs in the dangerous jungle of international politics, adding that people should choose whether they want slow and small improvements with Ko’s administration or large breakthroughs.

Taking a very different approach from the other candidates, independent candidate Wu E-yang （吳蕚洋） spent much of his speech and concluding statement discussing his personal experience drinking “honey lemonade,” which he claimed cured some of his ailments, and encouraged people to drink it to improve their health.

He also criticized Ko’s boasts about reducing government spending, saying that the government should focus on “creating an atmosphere that encourages consumption,” and that municipal expenditure on development could boost the economy and increase tax revenue.