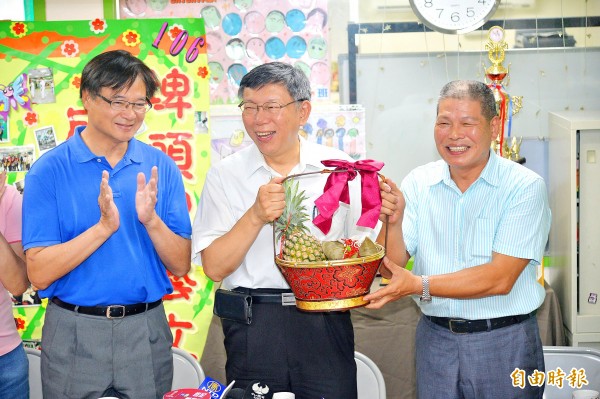 ‘RANDOM PROMISES’: The KMT and DPP candidates have both vowed to reinstate a subsidy to wealthier residents, and the DPP’s Pasuya Yao has promised free transport

Ko in 2016 implemented a policy to exclude wealthy and middle-income elderly residents from receiving the annual Double Ninth Festival cash subsidy, saving the Taipei City Government about NT$700 million （US$23.33 million） a year, but also resulting in a significant drop in his popularity.

The money saved would be used to systematically improve the city’s social welfare facilities and services, he said at the time.

However, KMT Taipei mayoral candidate Ting Shou-chung （丁守中） criticized Ko’s policies for helping the city’s elderly residents as “out of balance,” because only a small number of elderly people benefit from meal-sharing and other programs.

Visiting borough wardens in Zhongshan District （中山） yesterday, Ko said that he does not want Taipei to become a concrete jungle in which people stay in their apartments and do not know their neighbors.

“The subsidy is a test of the rational thinking of Taiwanese society, because it is very effective as a means of vote-buying,” Ko said, adding that if local governments make such promises and spend taxpayers’ money, then financial discipline and debt repayment targets cannot be achieved.

He asked whether political figures who “randomly make promises as if bidding at auctions” have really thought about where the money comes from and have considered the careful planning that is needed to implement policies such as making the one-month “all-pass” ticket for unlimited public transportation use in Taipei and New Taipei City free.

Yao has said that the NT$1,280 price of the monthly pass is too high and that it should be free

Ko’s administration has also spent too much on social housing and the the city government could have implemented its policies by spending less than 10 percent of current expenditure, Yao said.