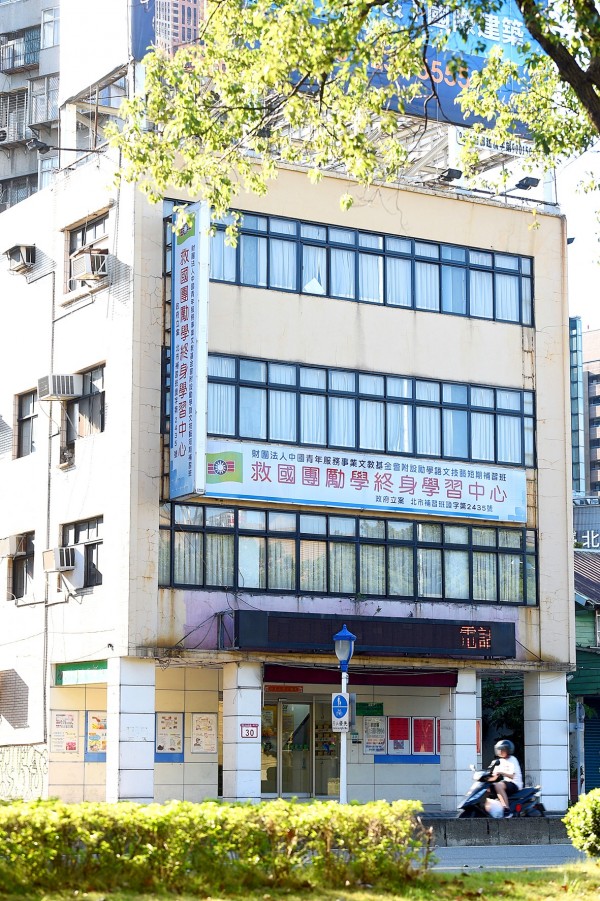 A building owned by the China Youth Corps located on No. 30, Zhongshan N Rd, Sect 1 in Taipei and with an estimated market value of NT$450 million is pictured on Aug. 15. Photo: Peter Lo, Taipei Times

NEFARIOUS ACTIVITIES? The actions of the corps, such as receiving NT$60m more for a youth center than it was budgeted, need to be investigated, the committee said

The Ill-gotten Party Assets Settlement Committee plans to investigate the China Youth Corps, with a hearing scheduled for February next year.

The committee said it is to examine the history of the corps’ establishment, the composition of its personnel and the source of its assets to judge whether the organization is affiliated with the Chinese Nationalist Party （KMT）.

The corps was mentioned in the party’s “Rules on General Promotion of Making Youth Groups Wholesome and Enabling their Coordination with the Party’s Basic Organizations” （健全各種青年團體與黨的基層組織配合推行總動員工作實施辦法） in Article 4 and Article 7, the committee said.

Article 4 says: “The China Youth Corps is the party’s peripheral organization to lead all activities for our party’s youths,” while Article 7 states: “The staff of the Corps should, as much as possible, be comprised of talented party members in order to reinforce the party’s leadership.”

One committee member said the links between the KMT and the corps are inseparable and that corps staff members overlap with those of the KMT.

Citing data from the special task force on party assets at the Executive Yuan in 2007, the committee said that the corps had 151 areas of real estate under its name, including 53 plots of land estimated at about 30,000m2 and valued at NT$697 million （US$22.03 million）.

The corps also has 98 buildings with a total floor space of 100,000m2, the committee said, adding that the corps must prove that these properties have been acquired legally.

The committee said the majority of these properties have been turned into youth centers that are situated in highly sought-after areas across the nation, adding that more than half are on government-owned land.

The committee said that the activities of the corps, such as allegedly receiving NT$180 million for the construction of a youth center in Taipei’s Jiantan （劍潭） from the Ministry of Education in 1980, when the funds earmarked for the project were capped at NT$120 million, is the reason it is being investigated, as it allegedly profited from “special privileges.”

The committee also said that the corps, registered as an aggregate corporation in 1987, reaps huge profits from its investments in various businesses, such as the China Youth Travel Agency, adding that high-level positions is such enterprises are mostly held by corps members.

The China Youth Foundation founded the Teacher Chang Foundation and is estimated to be worth NT$160 million, the committee said.

KMT Culture and Communications Committee deputy director Hu Wen-chi （胡文琦） said that the China Youth Corps and the National Women’s League have long been disassociated from the KMT.

The committee is pursuing illegal and unconstitutional political persecution against the KMT, he said, adding that the committee should not be selective in its investigations and should launch an investigation into every KMT party chairperson, including former president Lee Teng-hui （李登輝）.