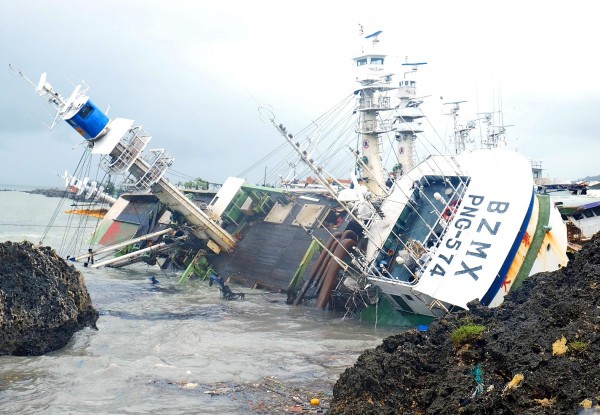 An overturned fishing boat is pictured yesterday at Sizihwan Scenic Area in Kaohsiung after it and three other boats broke loose from their moorings during Typhoon Meranti on Wednesday and floated down the coast.  Photo: Sam Yeh, AFP

Oil was leaking yesterday from one of four fishing boats that ran aground on Wednesday night in Kaohsiung’s Sizihwan Scenic Area （西子灣） during high winds and seas brought by Typhoon Meranti. However, the Environmental Protection Administration （EPA） said the spill was not serious.

The four vessels, each weighing more than 1,000 tonnes, had been docked next to one another in Cianjhen Fishing Port （前鎮漁港） in Cianjhen District （前鎮） before their lines broke during the typhoon, even though they had been tethered together.

A crew member from one of the boats, surnamed Chen （陳）, died after falling overboard, the only fatality reported from the typhoon. His body was recovered yesterday.

The other 22 crew members aboard the vessels were rescued.

The loose boats drifted until they hit an embankment near National Sun Yat-sen University in Gushan District （鼓山）, about 9km away from the fishing port.

More than 10 tonnes of the oil had spilled, while an estimated 60 tonnes was still in the boat, he said.

“The spill is not expected to seriously impact the local ecology because what the vessels carry is diesel, which is lighter, more volatile and less sticky than crude oil, so it is easier to clean up,” Liu said.

Another 250 to 300 tonnes of diesel oil on board the other tipped vessel does not pose an immediate risk of leaking, he said.

Taiwan International Ports Corp’s Kaohsiung division is responsible for removing the boats and cleaning up the spill.

It deployed oil booms to contain the spill, but efforts to tow the two upright vessels yesterday morning had to be called off because the tide was too low. The company was to resume towing operations last night after high tide.

After the two upright boats are removed, the company is to start draining the fuel on the two tipped vessels.

The operation is expected to be completed in two days, if it is not disrupted by another typhoon that is moving near Taiwan, Liu said.

The embankment is close to Gushan Fishing Port （鼓山漁港）, and local fishermen have urged authorities to speed up the removal of the ships and the spill cleanup to prevent the diesel oil from spreading to the fishing port.