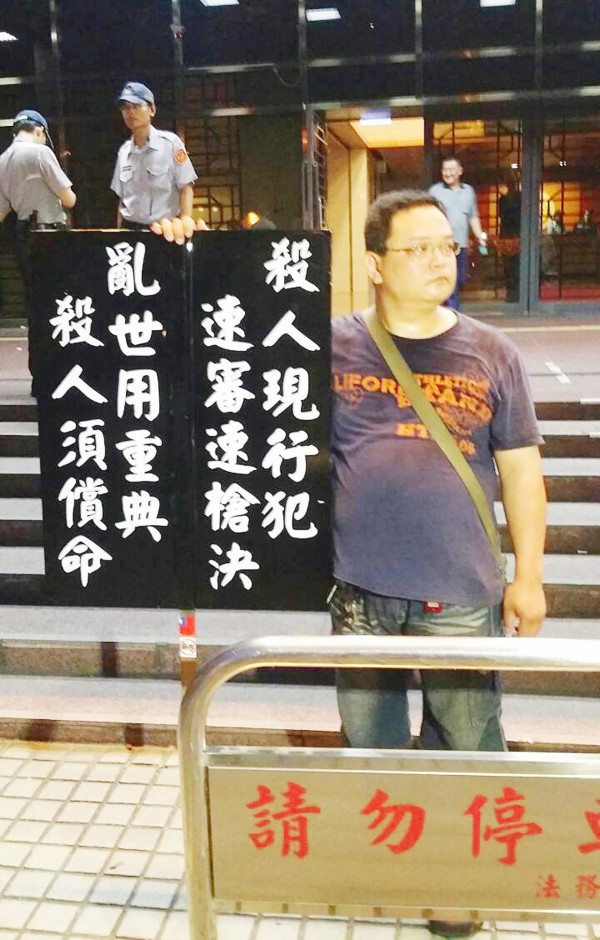 A man holds a sign to show his support for capital punishment in front of the Ministry of Justice in Taipei yesterday. Photo: CNA

‘CHEATING’: Killing convicts is not the answer to public demands for better child protection and building a safer society, death penalty advocates and opponents say

The Ministry of Justice’s executions of six death row inmates yesterday drew fire from both advocates and opponents of the death penalty.

“I support the death penalty, but I cannot accept that this is the government’s response to our call for better protection for children,” said Wang Wei-chun （王薇君）, chairwoman of the Association for Promotion of Children’s Rights and the aunt of a two-year-old child who died after being abused. “The government is not shouldering the responsibility that it should; it is trying to cheat.”

“So what happnes after the executions? Six more next year, or more executions when the next serious crime occurs? What is the government doing [about crime prevention]?” Wang asked.

“It looks like, rather than coming up with policy actions to prevent such crimes, the government is more interested in trying to shut the public up by executing people. It has certainly let the public down, as the public expects more from the government,” Lin said.

She said that whether one supports or opposes the death penalty, people from both groups share one thing in common: They both want to live in a safe and crime-free society.

The government should do more research into random killings — a relatively new type of crime in Taiwan — to see how it can effectively prevent them, she said.

“The first executions since President Ma Ying-jeou （馬英九） assumed office took place in April 2010 amid debates over the cross-strait Economic Cooperation Framework Agreement; then in March 2011, when it was discovered that a former airman, Chiang Kuo-ching （江國慶）, was wrongfully executed in 1996; and then there were more executions following the Sunflower movement and the heated protests against nuclear power,” Miao said.

“Ma should not use the death penalty as a way to save his declining support rate. If we must keep the death penalty, we should have a better system that can prevent it from becoming a tool for political manipulation,” Miao said.

When asked if the party would support abolishing the death penalty or working toward this objective once in power, Wang said that there should be measures in place to replace the death penalty and social consensus before it can be abolished.