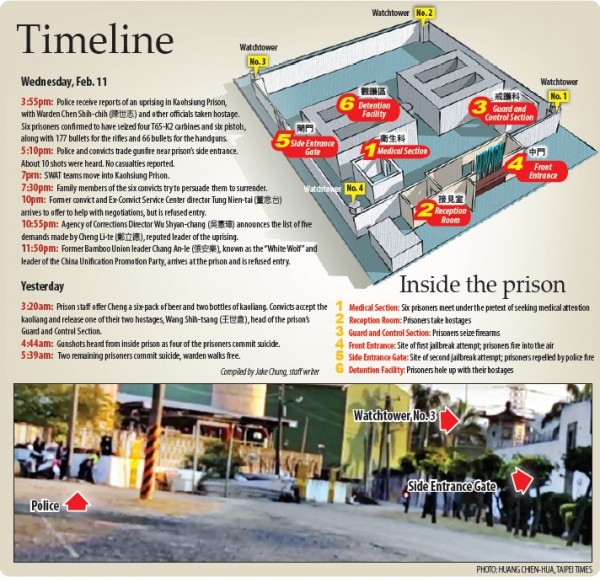 3:10pm: Six prisoners to the Kaohsiung Prison’s medical facility on the pretext of seeking treatment.

3:30pm: The six head to the reception room, take three guards hostages and headed to the Guard and Control Section area.

3:55pm: Police receive reports of an uprising in the prison, with Warden Chen Shih-chih （陳世志） and Wang Shih-tsang （王世倉）, head of the Guard and Control Section, held hostage after exchanging themselves for the three guards seized earlier. The prisoners confirmed to have taken four T65-K2 carbines and six pistols, along with 177 bullets for the rifles and 66 bullets for the handguns.

4.14pm: The prisoners attempt to flee through the front entrance of the prison, but are repelled by gunfire from local police precinct officers.

5:10pm: The group heads to the prison’s side entrance, but are rebuffed by police in an exchange of gunfire.

7:30pm: Family members of the six prisoners try to persuade them to surrender.

11:50pm: Former Bamboo Union leader Chang An-le （張安樂）, known as the “White Wolf” and leader of the China Unification Promotion Party, arrives at the prison and is refused entry.

3:20am: Prison staff offer Cheng Li-te a six-pack of beer and two bottles of kaoliang. The prisoners accept the kaoliang

4:43am: The prisoners open fire as they attempt to flee through the side entrance, police fire back.

This information was updated after it was first published.

5 Side Entrance Gate: Site of second and third jailbreak attempts

6 Detention Facility: Prisoners hole up with their hostages