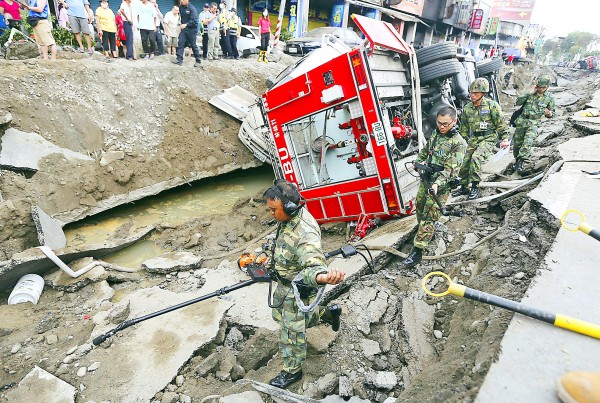 SEARCH AND RESCUE: As city officials and companies sought the cause of the series of explosions that claimed 26 lives, teams searched the rubble for survivors

The blasts tore through the city’s roads and dug a 100m trench up to 1.8m deep. At least 1.5km of roadways were damaged.

Cars and fire trucks were trapped and overturned in the rubble. Vehicles were hurled through the air, landing on the roofs of houses. Flames erupted from manholes after their covers were blasted off, with gouts of fire reaching 15 stories high.

According to the Greater Kaohsiung Government, at 8:46pm on Thursday it received reports of manholes spewing white smoke and the suspected smell of gas near Kaisyuan 3rd Road and Ersheng 1st Road in Cianjhen District （前鎮）. A few hours after the first report, a series of explosions took place on Yisin Road, Ersheng Road, Sanduo Road and Guanghua Road in the same district, and in neighboring Lingya District （苓雅）.

At press time, city government information showed that the incident had claimed 26 lives and injured 269. Among the 26 confirmed dead were three firefighters and one volunteer who rushed to the scene after residents smelled gas. Rescuers were also searching for two others who went missing.

At 8:30pm yesterday, two people were reportedly discovered alive under debris, and rescue workers were trying to free them using excavators, shovels and their bare hands. It has not been confirmed whether the two men are the two firefighters who were reported missing.

Some of the fatalities were homeowners checking out their properties after being informed about the first blasts.

Two injured people rescued from a fourth-floor balcony said that they had been propelled to the rooftop by the blasts.

The Chinese-language Apple Daily newspaper’s reporter Wei Bin （魏斌） was injured by the explosions, receiving second and third-degree burns over about 50 percent of his body, the paper reported.

Schools and work were called off in Cianjhen and Lingya districts yesterday.

Hundreds of troops and firefighters from neighboring Greater Tainan, Chiayi City, Taitung County and Pingtung County were deployed to support the rescue effort.

Yesterday morning, fires still burned on the streets, but the local government said that they were left burning to avoid further explosions, adding that the firefighting crew was on the scene to keep the fire from consuming nearby buildings.

The cause of the explosions had not been determined, with authorities now focusing on the volatile chemical propene — which is carried in pipelines that run alongside the city’s underground sewage system in the area — as the suspected cause.

Chemical companies such as CPC Corp, Taiwan （台灣中油）, China Petrochemical Development Corp （中石化）, China General Terminal and Distribution Corp （CGTD, 華運）, LCY Chemical Corp （李長榮化學） and Hsin Kao Gas Co Ltd （欣高）, which have pipelines in the area, were called in by the city government’s emergency response center amid the inquiry into the cause of the fatal blasts.

Minister of Economic Affairs Chang Chia-juch （張家祝） said yesterday morning that natural gas has been excluded from the list of possible causes, adding that gas check valves in the area have been closed.

The Greater Kaohsiung Government said a 4-inch pipeline carrying propene was found to have encountered a pressure anomaly between 8:40pm and 9pm on Thursday night.

Greater Kaohsiung Deputy Mayor Lee Yung-te （李永得） said CGTD Corp was attempting to transfer propene, a compressed fuel gas, from the seaport to LCY Chemical Corp, and the correspondence between the workers of the two companies showed that the effort failed. It was suspected that the gas had leaked during the transfer process, causing the explosions.

Greater Kaohsiung Mayor Chen Chu （陳菊）, at a meeting with Premier Jiang Yi-huah （江宜樺） at the city’s emergency response command center, said that Cianjhen District had seen another gas explosion that had caused serious damage in 1997 and called on the central government and the Industrial Development Bureau to examine and overhaul the city’s pipeline network.

Life detectors and rescue dogs have been employed in the rescue operation, as well as helicopters searching for signs of life within what is known as the “golden 72 hours,” during which most survivors are found.

People injured in gas explosions in Greater Kaohsiung are put onto the back of a small truck yesterday due to a lack of ambulances.

A car is seen in Greater Kaohsiung yesterday after it was blown onto the roof of a three story building due to the strength of a series of gas explosions that shook the municipality from late Thursday night to early yesterday morning.

A rescue worker and his dog search for survivors after gas explosions in Kaohsiung on Friday. Photo: AFP/Sam Yeh